California is a major producer of dried fruits, and we at UC Davis want to support the production of high-quality dried products. A team of researchers in the Food Science and Technology Department is interested in developing guidance on the best practices to ensure the safety and quality of dried California specialty crops.

To support our California dried fruit producers, we need information on the most common industry practices currently being employed for dehydrating. Do you sun dry or use…

The California Department of Food and Agriculture (CDFA) will be holding stakeholder meetings in February to solicit feedback from the public and agricultural stakeholders on farmer- and rancher-led climate solutions that sequester carbon, reduce greenhouse gases, and enhance biodiversity.

“These outreach meetings are essential to ensure we gain information and knowledge from the people who live and work on the land and the organizations that support them,” said CDFA Secretary Karen Ross. “We want to hear from all those interested in discussing farmer- and rancher-led efforts…

Striking a Balance: A Recipe to Become a Happier Farmer

In my last blog post, "Reflect, Refine, and Refresh for a Long Farming Career," I talked about the importance of setting boundaries between farming and personal life to sustain a farming business over the long haul. This week, I’ll go into more depth on how I reflect on the past season to make time for personal activities, improve my business, and maintain my passion for farming.

A simple way to do this is to grab a piece of paper and a pen and list what did work over the past farming season and what didn't.

Nothing is too little or too odd to add to the list. The point is…

It’s the start of a new year, and CCOF has set a bold, new goal for organic: Thirty percent of California’s farmland will be organic by 2030. We know it will take hard work to get there, but that’s nothing new for organic farmers. Here’s the plan for moving forward in 2021.

In partnership with ranchers, policymakers, and farm and environmental groups, CCOF is working to create economic opportunities for small organic ranches. Expanding on-farm slaughter options for small ranches raising goats, sheep, and swine will strengthen these…

CCOF envisions a world where organic is the norm, a world where every farmer has access to the tools to build healthy soils and foster biodiversity, a world where every eater has access to fresh, organic food that nourishes the body. To create this world, CCOF has set the ambitious goal of reaching 30 percent of California's agricultural acreage in organic by 2030.   Organic as the Norm Why are we working to expand organic acreage in California? Because organic agriculture is a solution to some of the greatest threats we face, from climate change to economic and health inequities. Organic…
Read more ››

Last month, CCOF hosted a virtual screening of the critically acclaimed film Gather, a documentary directed by Sanjay Rawal. Gather tells the stories of Native Americans in the United States reclaiming and reigniting sacred connections to food and land through the traditional teachings of their elders as political, social, and economic forces threaten their ways of life.

Attendees included hundreds of CCOF-certified members, organic supporters, and representatives from the Washington State Department of Agriculture. Gather sheds light on how the shadowed history of food…

Written by Noah LakritzonTuesday, January 19, 2021ongeneral organic, policy
On January 8, California Governor Gavin Newsom released a $227 billion proposed budget for the 2021–2022 fiscal year. Despite concern over the effect of COVID-19 response on the state's budget deficit, the Governor's proposal includes healthy funding levels for several critical agriculture programs, including the following:   $3.75 million ongoing funding to the California Department of Food and Agriculture to support integrated pest management strategies and a new, tiered approach to the pesticide mill fee that taxes pesticides based on toxicity levels $6.7 million for UC Cooperative…
Read more ››

Bonterra is the latest in a group of businesses to support organic farmers who have suffered from the 2020 wildfires and COVD-19 pandemic. Many small and medium-sized organic farms experienced disruptions in supply chains due to farmers' market closures and significantly reduced demand from the food service industry. With restaurants, bars, hotels, and other businesses closing, many producers had to completely reinvent their business models, and then dealt with COVID-related illnesses or wildfires to boot.    During the giving season, Bonterra stepped up and offered the CCOF Foundation a…
Read more ››

Written by Noah LakritzonMonday, January 11, 2021on
On December 1, United States Senators Cory Booker (D-NJ), Elizabeth Warren (D-MA), and Kirsten Gillibrand (D-NY) released a landmark new bill to support existing and aspiring Black farmers. The 78-page bill would provide increased resources for all farmers, but particularly for Black farmers, through increased land access, education, and funding for existing USDA programs such as the Conservation Stewardship Program. It would also seek to remediate historic and ongoing discrimination at the Department of Agriculture by reforming the USDA Office of Civil Rights and creating an independent…
Read more ››

Written by Peter NellonMonday, January 11, 2021on

CCOF is deeply saddened by the news of Amigo Bob Cantisano’s passing in late 2020. Amigo Bob was a tireless organic farmer, advocate, and educator who devoted his life to supporting and growing organic agriculture.

CCOF Board Chair Phil LaRocca said, “Amigo Bob Cantisano was a close friend. As an early innovator and true believer, he dedicated his life to growing and strengthening the organic movement. He never gave up his belief in and support for organic farmers. His energy and knowledge will be missed but his impact will never be forgotten.”

Amigo, along with other…

Reflect, Refine, and Refresh for a Long Farming Career

Written by Guest BloggeronMonday, January 11, 2021onCCOF Foundation
I don’t know about you, but, like most of my farmer friends, I’m looking forward to a winter break where production naturally slows or stops and the constant farm workload is reduced. As farmers, we juggle so much. There typically isn’t any time or energy left for thinking about how we could have done better until winter provides us the opportunity. One thing I love about farming is that every year there is an opportunity to make changes and redesign my business. Not many other professions allow for such creativity and challenge.   At the end of the season, I reflect on how I feel about…
Read more ››

Have Questions About the CCOF Member Survey?

This winter CCOF launched a survey of our membership to learn more about your certified organic businesses and to improve CCOF services. If you have not completed your survey, there is still time to submit!

How do I submit my CCOF member survey?

The 41st EcoFarm Conference, Reimagining Our Future, will be live online in collaboration with Sierra Harvest, Jan 20–23, 2021, featuring over 50 workshops, intensives, keynotes, Spanish content, a virtual expo, networking, special events, and more! Using a farmer-to-farmer education model, EcoFarm is an essential networking and educational hub for ecologically minded farmers, ranchers, and all who support their success in growing a healthy and just food system and world. Register by Tuesday, December 15 with code reimagine and save $30!

There's something for everyone at EcoFarm…

Holiday Schedule at the CCOF Office

Written by ManualMigrator2onMonday, December 14, 2020on

Thank you for your support of organic in 2020!

As you are gathering close with family this holiday season, CCOF staff will be doing the same. Please note that the CCOF office will be closed from December 24 through January 1.

We’ll be sure to get back to your messages and requests right away when we return. 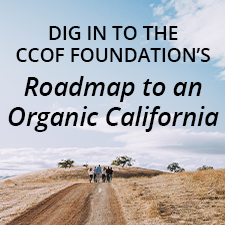